Find below a selection of research results from the projects on data from SNAC-K.

Cognitive impairment, no dementia (CIND) is considered an at-risk condition for dementia. However, many older individuals with CIND will remain cognitively stable or even revert to a normal state of cognition. In this study, we investigated whether adding a test of motor function (i.e. walking speed) to the neuropsychological assessment improves our ability to detect dementia. Using data spanning over 12 years of follow-up we found that people with co-occurring cognitive and motor dysfunction experience the highest risk of dementia. Also, adding an easy‐to‐perform measurement of physical function—such as walking speed—to a standard cognitive battery dramatically improved the detection of prodromal dementia. Taken together, these findings point toward a strong relationship between cognitive and physical domains in the development of dementia, suggesting that markers of both may help in a better dementia risk assessment (Grande, et al. Alzheimers Dement 2020)

Genetic risk of dementia is mitigated by cognitive reserve

Participating in Mental, Social, and Physical Leisure Activities and Having a Rich Social Network Reduces the Incidence of Diabetes-Related Dementia in Older Adults

In this study, we investigated whether greater engagement in leisure activities and a richer social network may compensate for the increased risk of dementia in older adults with diabetes. During 10-year follow-up, diabetes was associated with a 2-times greater risk of dementia, especially of vascular origin. However, this increased dementia risk appeared to be mitigated by active engagement in leisure activities or a rich social network. We estimated that if all older adults with diabetes in our cohort had an active lifestyle, 48% of diabetes-related dementia cases could be prevented. These findings highlight that an active and socially integrated lifestyle could represent a key preventive strategy for dementia, especially in high-risk people, such as those affected by diabetes (Marseglia et al., Diabetes Care 2019).

In this population-based cohort study of people aged 60 years and older, atrial fibrillation (AF) was associated with faster cognitive decline and a higher risk of dementia, independent of clinical stroke. Among participants with AF, use of anticoagulants was associated with a lower risk of dementia, suggesting potential cognitive benefits of anticoagulant therapy in patients with AF (Ding M et al, Neurology 2018).

The Health Assessment Tool (HAT) is a composite measure that summarizes the information provided by five health indicators commonly available in various health settings: severe and mild disability, cognitive and physical functioning and multimorbidity. Geriatric health charts built based on HAT scores can help care providers interpret individual scores in the context of a reference population of the same age and sex. The charts can be used to forecast future trajectories of health and care needs both at the individual (e.g. planning of home care) and population (e.g. resource allocation) levels. Individual-level HAT scores and the corresponding provisory health curves can be obtained using the online calculator at the following link: HAT-calculator for people 60 years and older (Santoni G et al, J Gerontol A Biol Sci Med Sci 2016 & 2018, JAMDA 2018).

Maintaining a healthy lifestyle and a rich social networkwas positively associated with survival even among people aged 75 years and older. People who reported being physically active lived 2 years longer than those who did not. Nonsmokers who were physically and mentally active and had a good social network (low risk profile) lived about 5 years longer than those who smoked, were inactive, and had a poor social network (high risk profile). These associations were also found in individuals aged 85 years and older and those with chronic diseases (Rizzuto et al, BMJ 2012).

Recently, researchers have suggested that there is a relationship between telomere length and longevity such that longer telomeres are associated with an increased life span. We have examined the role of a gene (hTERT) that is involved in the modulation of the human telomerase on longevity in 2 cohorts of older adults—Kungsholmen project and SNAC-K. We found an association between the -1327T/C polymorphism of the hTERT gene and survival in women aged 75+. Female T/T carriers lived 2-3 years longer than the C/C carriers. This effect was not present in men or in younger people aged 60–72 years (Kalpouzos G et al., J Gerontol A Biol Sci Med Sci 2014).

We compared prevalence, incidence, and mortality associated with ADL disability during the 1990s and 2000s. Both prevalence and incidence of disability remained stable during the last decades in this urban Swedish population, with a trend towards a slow decline. Mortality remained steady among disabled persons but decreased among persons without disability, suggesting that increased life expectancy in the last decades may be essentially driven by longer lives of functionally independent people (Angleman et al, J Gerontol A Biol Sci Med Sci 2014). 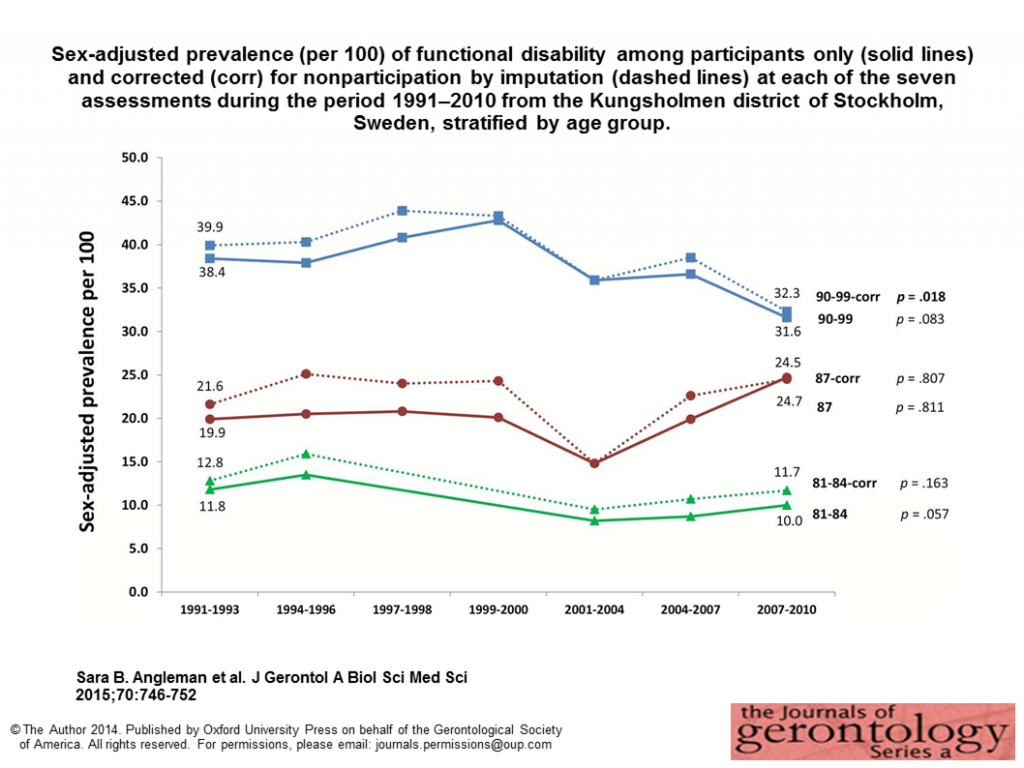 The effect of diabetes on aging

Genetic association studies suggest that variation in the HHEX–IDE gene region may underlie the relationship between diabetes and dementia. In collaboration with the department of Medical Epidemiology and Biostatistics (MEB), KI, we tested this hypothesis in 2 cohorts of elderly people (Kungsholmen Project and SNAC-K) and found that in both cohorts, the AA genotype interacts with diabetes to multiply the risk of dementia and AD among elderly Swedish people (Xu et al, accepted in PLOS Medicine). Vascular burden undermines brain integrity. In our exploration of the factors that contribute to loss of brain integrity in aging, we found that old age, genetic susceptibility (e.g. APOE ε4), and increased burden of vascular risk factors (e.g. hypertension, diabetes) are associated with brain pathology. Specifically, we showed that the aggregation of heavy alcohol consumption, hypertension, diabetes, and current smoking is detrimental to white-matter integrity, and that this effect is more pronounced among APOE ε4 carriers (Wang et al, Neurology 2015).

Secular trends in dementia occurrence from the 1980s through the 2000s

Data from the Kungsholmen Project and the SNAC-K study showed that the prevalence of dementia was stable between 1987−89 and 2001−04 in central Stockholm, Sweden, whereas the survival of patients with dementia increased. These results suggest that incidence of dementia may have decreased over the last 2 decades in this region (Qiu et al, Neurology 2013). 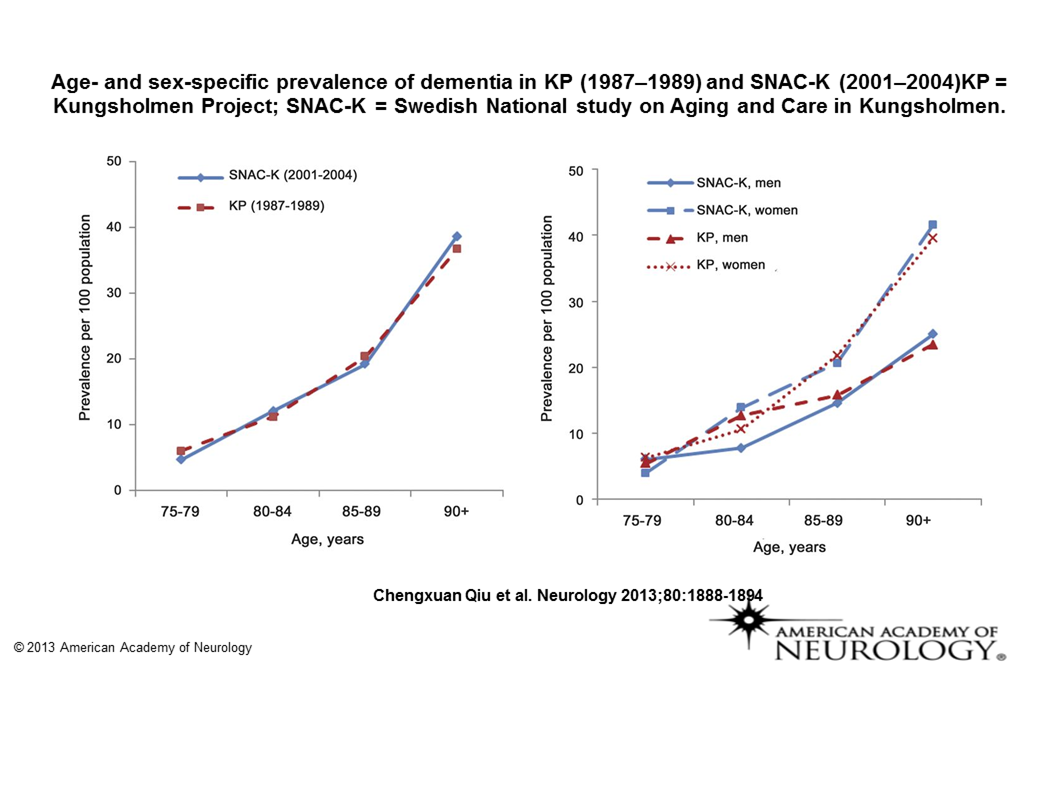 Previous research suggested that psychosocial stress exacerbates the risk for dementia, but because of variations in stress measures and study populations, the results of earlier studies have been inconsistent. In collaboration with the department of MEB, KI, we examined the relationship between negative events experienced throughout the entire lifespan and hippocampal and amygdala volumes in older adults. The results suggest that the effect of negative life events on the brain depends on the time when the events occurred, with the strongest effects observed during the critical time periods of early and late life (Gerritsen et al, Psychol Med 2014).

In the multicenter European Study of Cohorts for Air Pollution Effects (ESCAPE), researchers investigated the association between natural-cause mortality and long-term exposure to several air pollutants. Data from 22 European cohort studies created a total study population of 367,251. The findings support the hypothesis that there is an association between long-term exposure to ambient particulate matter air pollution and mortality, even at concentrations below the existing European Union limit values (Beelen et al., Lancet 2014).