SNAC, which started in 2001, is conducted in four locations in Sweden. The SNAC-Kungsholmen substudy (SNAC-K) draws its study population from Kungsholmen, a neighborhood near the center of Stockholm, and from the Essingen islands (Essingeöarna) just outside Kunghsholmen. SNAC-K consists of a population study and a care system study.

Participants in the population study are 60 years and older. At regular intervals, they take part in tests where nurses, doctors, and psychologists collect social and demographic information, assess physical functioning, take blood tests, measure height and weight, and much more. Participants undergo clinical, neurological, and psychiatric examination and various tests to assess their cognitive abilities.

The care system study follows people who have turned 65 and have been granted eldercare, long-term home health care, or home rehabilitation.

100 milion pieces of data
– 26,000 examinations have been completed as part of SNAC, and 100 million pieces of data have been gathered. Approximately 40 doctoral students are working with data from SNAC today, said Mårten Lagergren, docent and coordinator for the national SNAC project and the person responsible for the SNAC-K care system study.

– Healthier aging is a reality today. Older people have a lower risk of heart-related diseases and dementia than 20 years ago. Additionally, a greater proportion of people are independent in their basic activities of daily living. Even so, the absolute number of people who have age-related diseases such as dementia is not going down because the number of older people in the population has grown and is expected to continue to grow over the next two to three decades.

Physical activity can compensate for reduced physical functioning
Anna-Karin Welmer is a physical therapist, associate professor, and deputy project manager of the SNAC-K population study. She described the development of physical functioning in old age. For example, walking speed and balance are measured in SNAC.

Dementia and drug use
Johan Fastbom, a medical doctor and professor, has used data from SNAC to study drug use in older people. He notes that the use of drugs in people with dementia has increased in the past 20 years.

– This is a worrying development. For example, it increases the risk of injury from falls, said Fastbom.

Another result highlighted during the meeting was overtreatment with antidepressants, for example in eldercare institutions. 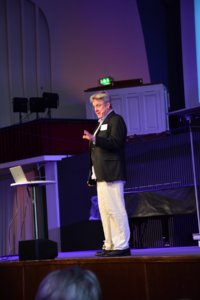 – Episodic memory and working memory decline as we age, whereas semantic memory and procedural memory are well preserved, said Bäckman.

Individual differences are large, though, and are affected by demographic, lifestyle, health-related, biological, and genetic factors. However, older people have a large reserve capacity and a potential to improve their memory.

– For example, we’ve studied whether you can compensate for high genetic risk for decreased memory by being physically active, and we see that it’s possible, said Bäckman.

– The human brain is plastic and possible to change through experience and systematic training. There’s thus a possibility to compensate even when you get older, said Bäckman, and referred to studies underway at the Brain Lab at the Aging Research Center.